At home in the East End of Glasgow 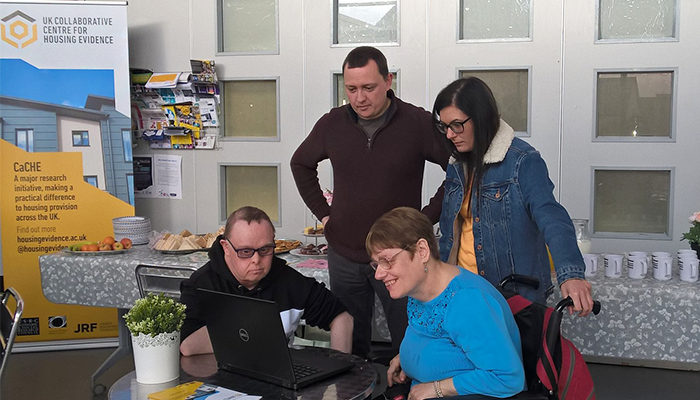 Dr Gareth James introduces the CaCHE Glasgow East End Knowledge Exchange Hub and gives more information on the initial findings. Look out for the final report which will be published in early 2020.

The UK Collaborative Centre for Housing Evidence (CaCHE), distinctively, has developed five knowledge exchange hubs around the UK. By engaging with representatives and leaders of each regional/national housing system, these hubs have contributed to genuinely co-producing our research and evidencing priorities. We are aware that being based in Bridgeton, in the heart of Glasgow’s East End, we have an opportunity to do something similar at a local level: to work directly with and co-produce local research and evidence that can be of benefit to our partners and the residents in this part of the city.

For this reason, we have established a Glasgow East End Knowledge Exchange Hub made up of local practitioners, residents and other interested parties, to develop a work programme with and for the community. Following the same principles as our larger hubs, we held a prioritisation workshop in August 2019 to identify and prioritise housing-related issues at a local level, and to discuss how we might undertake a series of focused activities in this part of the city that might make a difference to the people who live and work here.

Participants identified several housing-related issues, including some – e.g. housing quality and affordability – that were also identified by members of the national-level hub in Scotland. However, at the local level, three issues came out on top, none of which featured prominently in national-level discussions. These were mental health, loneliness/isolation, and safety. A fourth issue – poverty – was also identified as a driver of these other issues. Here, I focus primarily on the first of these – mental health and housing – although there are clearly connections between all of the above.

There is a large body of evidence on the relationship between housing and health inequalities, and a growing literature in relation to mental health, specifically. In this report, for example, Dr Jenny Preece and Dr Emma Bimpson review evidence on the relationship between housing insecurity and mental health. They show, among other things, that financial stressors (such as being behind on mortgage payments), evictions and foreclosures, as well as wider insecurity of tenure can increase the risk of experiencing mental ill-health. This is further evidenced in a report on generation rent by Dr Kim McKee and Dr Adriana Mihaela Soaita, in which they demonstrate how the precarity of private renting has a negative impact on the wellbeing of young people, who experience stress, anxiety and depression as a result of housing insecurity and affordability concerns. In a follow-up report on older renters living in the private rented sector, the same authors point to common experiences between older and younger renters, but they note that the financial stress of renting and the challenges of making a rental house a ‘home’ were exacerbated for families with children. Furthermore, the Housing through Social Enterprise project by colleagues at the Glasgow Centre for Population Health shows that the health and wellbeing of both social housing and private sector tenants is shaped by whether or not they are able to feel at home in their tenancy.

Inspired by this literature, we carried out a series of short interviews with local residents, housing providers and community-based organisations in Glasgow’s East End, in order to better understand what ‘home’ means to people living in this part of the city; what challenges people with (experience of) mental ill-health face in realising a sense of home; and what housing providers are doing, and can do, to help people to transform a tenancy into a home. The result of this work can be seen here the video below and a fuller report will be published in early 2020.

We will continue to engage with local partners and residents in an ongoing series of activities, with an eye to developing practical recommendations for housing policy and practice, locally. If this initiative is successful, we will explore opportunities to undertake similar work in other parts of the UK where CaCHE also has a permanent presence; for example, in Sheffield, Cardiff, Belfast and London.

Dr Gareth James is a Knowledge Exchange Associate for the UK Collaborative Centre for Housing Evidence.