Automation and the fight for a human future 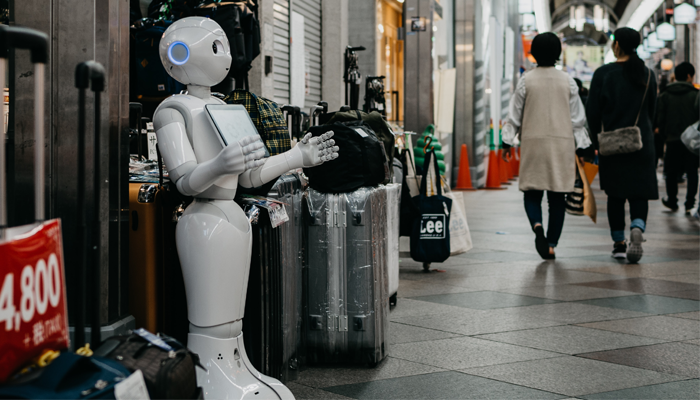 In this blog, James Tickell shares his reflections following the CaCHE workshop ‘Towards a fully automated housing system in 2030?’, which took place in London on 9 December 2019.

An automated housing system … within 10 years? Exciting? Alarming? Another pipedream? Let’s imagine how such a system might look, and then speculate on the opportunities and pitfalls it could bring. And finally, some reflections on what may come about, given current harsh realities, and on how automation can be compatible with human values and social purpose.

For buildings, it’s easy enough to envisage; we’ve all heard about the internet of things. Embed smart chips and sensors in major building components, and hey presto, maintenance becomes so efficient. That’s easier for newbuilds of course, but existing stock can be retrofitted. Add regular drone surveys, and a landlord can know pretty much everything about its property assets, in real time.

When a tenant – or a sensor – actually has to call in an unpredicted repair, nine times out of ten it will be clear what’s needed. No more going back to the depot for the missing boiler or lift parts, or having to order them from Germany or Peterborough. Let’s assume that 2030 operatives will still be human, even if vans are self-driving. Robots surely won’t be ready to get down and dirty under a sink, even by then.

Artificial intelligence then applied to data allows pattern recognition and an uncanny ability to fix problems before they arise. A ‘just in time’ approach enables a reduction in stockholding, while careful journey planning saves on mileage and time. ‘No shows’ by the tenants are largely avoided, as sensors will be able to indicate whether anyone is there to answer the door. Once an operative is on site, they will be able to carry out any other scheduled tasks before moving on.

Blockchain technology creates self-verifying and tamper-proof databases; eventually, it will have profound effects on contracts, asset registers, land title and more besides. Compliance and safety become a doddle, while the savings are massive in terms of staffing, materials and time. As blockchain becomes a reality, we can speculate that internal auditors, complex assurance systems and middle managers more generally will largely become a thing of the past. Organisations will de-layer, with more horizontal structures.

So far so good? Or were you uneasy about the privacy implications of sensors revealing who was there to answer the door? There’s a lot more to think about. Examples already exist – you can easily buy an airline ticket without speaking to a human. Of course, if things go wrong and you do need to speak to someone, then it’s a different story. It can take hours, listening to music, pressing buttons, going in automated loops, and spending a small fortune on premium phone lines.

Maybe lettings and routine tenancy work could be done a bit like that, although without the waiting and the music? Not sure? We can hope that 2030 artificial intelligence, unlike today’s artificial imbecility, will be better at sorting out the odd anomaly. It could also be brilliant at collecting and organising tenant feedback, giving volume to the tenant voice.

Arrears could be dealt with similarly. Even better, AI will predict well in advance which households will be vulnerable to financial hardship, allowing support to be directed appropriately. In the same way, it would be possible to predict which households would make greater demands on maintenance services, or end their tenancies in an untoward manner. Some landlords might be tempted not to let to such households in the first instance, but the value of the business intelligence accrued would surely outweigh such concerns?

It goes on. Face recognition technology could be just the ticket for preventing illegal subletting, and for dealing with anti-social behaviour. In fact, you could do away with keys altogether, with entry systems recognising and admitting only tenants and their families. By 2030, systems should be able to recognise people from all different ethnic backgrounds, a distinct glitch in today’s matrix, which will be familiar to many of us with e-passports.

As regards more vulnerable residents, the possibilities for automation are already considerable. Call systems, with fridge and floor sensors, can detect whether someone may be unable to get out of bed, have fallen or not be eating. In Japan, robot nurses, medicine dispensers and pets play an increasing role, so that care can be given with little or no human contact. As for company … there’s always the possibility of a chat with Alexa.

A heady cocktail of ethical and practical issues begins to emerge. Clearly, new technologies are already with us and will become more effective in time. The possibilities are endless, and things can go either way in terms of utopian or dystopian futures. Financial savings are there to be made for landlords, and these can be reinvested into better customer experience, care, support and empowerment. Or they can become more generous dividends for investors.

On the dark side, things could trend towards the surveillance capitalism explained by Shoshana Zuboff, under which landlords would amass data about tenants, and exploit it to control behaviour, sell additional services and increase efficiency. You only need to look at Google, let alone China’s ruthless and internet-enabled control of Uighurs to see how things could move that way.

Where does that leave us? Looking at the glacial pace of sector IT investment, the possible retrofitting to millions of properties and prevailing austerity, 2030 seems optimistic for any widespread automation of mainstream housing, especially given the fragmented nature of the sector. The gains could be huge, but so too would be the investment needed. Care of the elderly may turn out to be a different matter, given labour shortages and demography – once the Japanese robot nurses are perfected, stand by for their introduction here.

The technologies needed for housing’s automation will exist by 2030, for sure, and will be widely used by the Ubers and easyJets of the day. But a safe prediction is that many landlords will still be using the same IT systems as now, with a few fancy add-on bells and whistles, and some smarter backroom trend analysis.

The overall direction though is certain, and should not be ignored, even if 2040 may be a safer bet than 2030. The technology itself is morally neutral and all will depend on how we choose to use it. Things will  play out according to the balance of power between providers and consumers –governed by market conditions, demographics, economics and the legislative framework of safeguards. But equally important, for social landlords, as they grapple with new ways of working, it will be vital to remember and reinterpret their social purpose for the new context. Mission statements are all big on customer focus, and on how ‘our people’ are our greatest asset. Let’s all try and keep it so as 2030 draws nearer and keep up Zuboff’s ‘Fight for a Human Future’.

James Tickell is a Partner at Campbell Tickell.