Chris Foye: What does a ‘fixed’ housing system look like? Dr Chris Foye gives an overview of the recent CaCHE seminar where we brought together a group of policymakers and practitioners and asked them to consider what their vision of a ‘fixed’ housing system looks like.

In the prioritisation exercise that we undertook last summer, this issue kept on cropping up. Across the UK stakeholders felt that there was no clear consensus on what constituted a ‘fixed’ housing system.

In one sense, this was unsurprising. As David Clapham and I argued in the ‘Evaluating Housing Outcomes’ project, housing policy and practice is centred upon a number of faultlines where the values of different social groups conflict, the most important relating to house prices and rents: home-owners, landlords and rentier capital generally wanting them to rise, renters and productive capital more inclined to want them to fall. With these faultlines, it is extremely difficult, and probably impossible, for a society to unanimously agree upon a single unified housing vision.

All too often, however, the values and value-conflicts which underpin the housing system are plastered over, dealt with implicitly rather than explicitly (Allmendinger and Haughton, 2012). House price ‘growth’ is portrayed as an unambiguously good thing with all winners and no losers (Munro, 2018). Land value capture is portrayed as a technical problem, rather than an ethical issue about how much of the betterment value uplift should go to the landowner versus the ‘wider community’ (Clapham and Foye, 2019).

In this workshop, we wanted to go back to first principles. Through deliberating over the values which ought to underpin the housing system, we sought to identify the key areas of contention/consensus, and stimulate creative thinking about solutions. And since the Scottish Government only recently published its new vision and principles statement for housing, which grapples explicitly with a lot of these conflicting values through, for example calling for stable housing prices, this was an ideal location to start.

One afternoon in September, we got together 23 policymakers and practitioners in Scotland, who had generously donated their time to this experiment, and broke them into groups of 4-6.  We then ran two consecutive deliberative sessions. For the first, we provided each table with a list of ten ‘housing capabilities’ (Clapham and Foye, 2019) based on Shelter’s Living Home Standard (see Table 1, below). We know that many households in Scotland lack at least one of these ten capabilities (Shelter Scotland, 2018) so clearly these capabilities are already being traded-off with each other in policy and practice. To make this trade-off explicit we asked each table to rank the capabilities (adding to them if necessary) and decide upon their top three.

For the second session, we then asked each table to consider how the housing system could be designed or adapted to best provide these capabilities. To stimulate thought, Ken Gibb started by summarising the recent CaCHE paper on ‘Systems-thinking’. Armed with string, blu tack and post-it notes, each table was then asked to; i) identify the key determinants (social, economic, environmental) which enable or prevent individuals from achieving the top-ranked housing capabilities and ii) suggest, deliberate over and ,if possible, agree upon up to £500M per annum worth of policy changes that could be made to maximise the provision of these top-ranked capabilities.

Which of the following capabilities should an individual have access to without regularly having to cut spending on household essentials like food or heating;

In terms of which capabilities to prioritise, there was an overwhelming consensus that those basic physical characteristics of home – safety, running water, toilet, heating, facilities to cook food – should be right at the very top. This meant that the other capabilities relating to outdoor space, privacy, commuting time and sense of neighbourhood security had to be relegated to the bottom of the list. The ability to ‘control how long one can live in the home’ was perhaps the most awkward to deal with. Several participants made the case for it being near the top of the list, as at least for certain social groups (e.g. those with children) this was a fundamental aspect of home, but in the end it was pushed down in favour of those more tangible, urgent and universal capabilities relating to physical housing conditions.

The results from the second session on systems-mapping varied much more dramatically from table to table. An example can be seen in Figure 1 below and all four table’s system maps can be found in the blog appendix. The ‘determinants’ (in pink boxes) took a variety of forms: economic (e.g. incomes/rents), physical (e.g. condition of housing stock), social (e.g. social networks), regulation (e.g.enforcement) and cultural (e.g. collectivist vs individualist). The policy recommendations (in yellow boxes) generally focussed around changes in government funding, taxation and regulation. 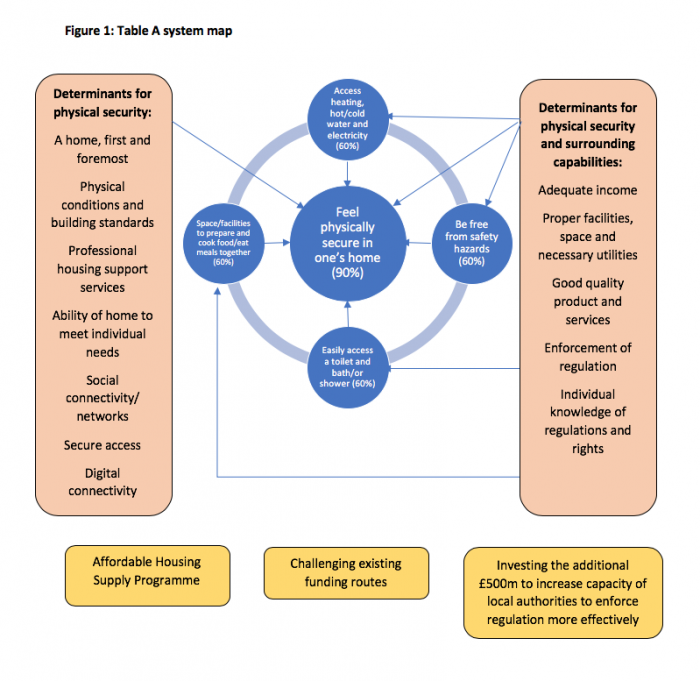 In terms of the first session, everyone who provided written feedback (n=9) agreed that it was useful to reflect upon the values (or ‘capabilities’) which ought to underpin the housing system but some felt that the exercise was a bit abstract and too far removed from everyday policy/practice, while others felt that trading-off between these ten core capabilities set the bar too low.

The vast majority of attendees also found the second stage helpful in terms of highlighting the complexities and interdependencies of different elements of the housing system. However, some tables seemed to find it difficult to trace the thread (or string in this case)  between capabilities-determinants-policy, which is understandable give that policies aimed at addressing one determinant or capability are likely to have spill-over effects (positive/negative) on other determinants/capabilities. We all felt that a lot more string, blu tack and time was needed to comprehensively model these relationships.

One purpose of this workshop was to bring any conflict in underlying values to the fore so that participants could critically reflect upon these and potentially change their mind as a result. It is impossible to ascertain exactly how we fared on this front. There was some disagreement over the relative importance of security of tenure as a capability and the role of regulation, but overall there seemed to be a high degree of consensus. And although a couple of people did admit to changing their mind (on taxation, for example) most felt that the exercise ‘developed’ their thinking and made them appreciate the complexity of the housing system, rather than fundamentally altering their opinions.

Dr Chris Foye is a Knowledge Exchange Associate at the UK Collaborative Centre for Housing Evidence.