This is the fifth and final series of blogs that sets out the results from CaCHE’s approach to co-producing research priorities from across the UK. It draws together the priorities emerging from the first meeting of the North England and Midlands Knowledge Exchange (KE) Hub and the work being undertaken with residents. This blog will summarise the results and key issues emerging from the North of England and Midlands and outline the plan the KE Hub is taking to move forward with their work to start raising awareness of these challenges.

Results of an initial prioritisation survey

Between April and July 2018 the CaCHE Knowledge Exchange team undertook a survey of housing stakeholders across all five regions. Stakeholders in the North of England and Midlands took place during June 2018. The aim of the survey was to gather a wide range of views on priority housing issues. The survey asked: ‘What do you believe are the priority housing issues in the North of England and Midlands?’ Respondents to the survey could identify up to five priorities and also rank these in order of importance. Thirty responses, identifying 86 individual priorities, were received. Respondents’ top-ranked priorities are listed in table 1 below. When all identified priorities are taken into account, the ranking is as at table 2. 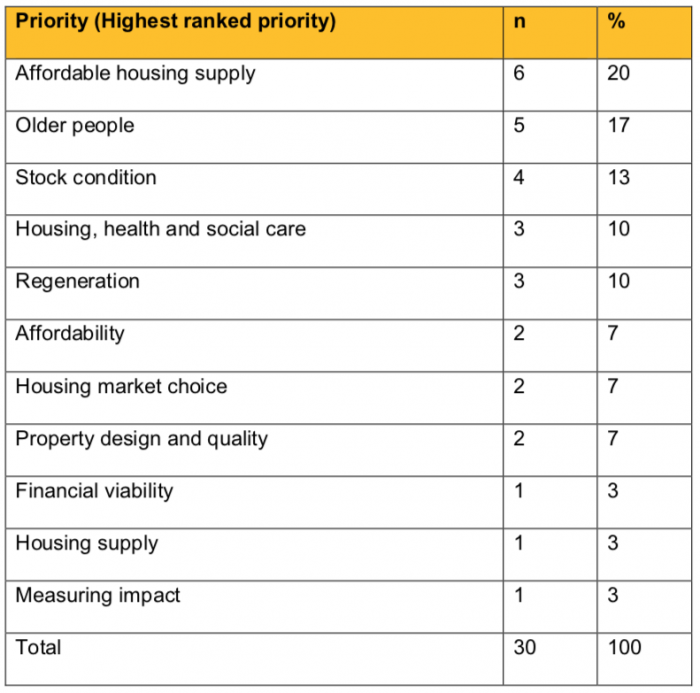 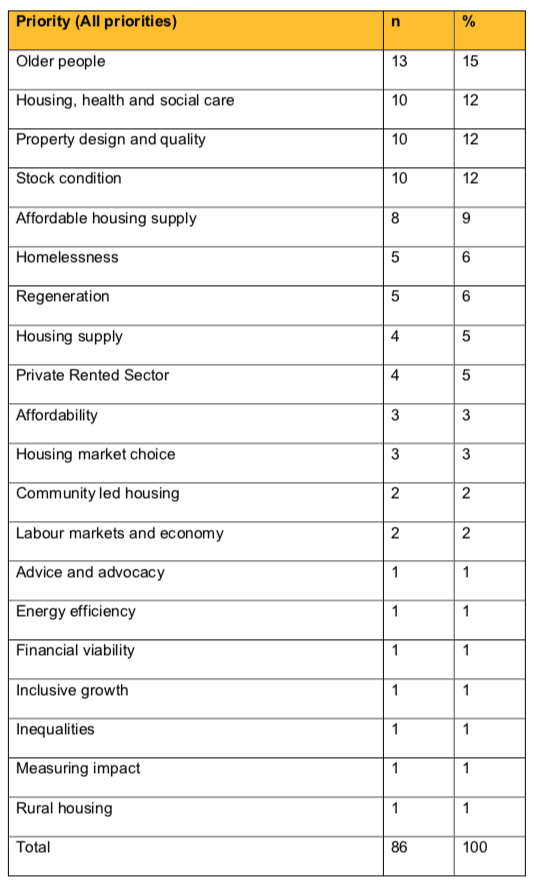 The survey results highlight that the particular challenges in the North of England and Midlands coalesce around the need for a focus on the quality and diversification of housing available to different people at different stages in their lives. As we discuss more below, this includes affordability across all tenures, how do we meet the needs and aspirations of older people and how can we tackle issues of poor quality housing, and the impacts this can have on occupants, across all tenures.

The North England and Midlands KE Hub meeting took place in Sheffield on the 18 July and was attended by 18 Hub members representing a broad range of stakeholders across the public, private and third sectors as well as academia. Attendees were split into four groups, where each member could champion their own priority before engaging in a deliberative and iterative process to reduce these to three or four high priority issues per group.

The top priorities identified by the groups were as follows: A final plenary then allowed us to work through some of these high-level housing priorities across the regions within the North of England and Midlands. While there was some overlap between groups, in general the process identified a breadth of issues that are important to policy and practice. Below, we have set out the final priorities linked to the current themes of CaCHE’s work: 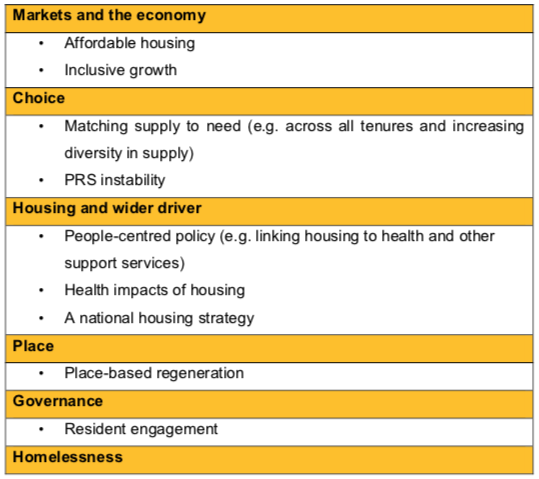 Of the themes listed above, homelessness was the only one to not have any final priorities explicitly put forward from this KE Hub. However, this does not detract from the importance of this work. Within CaCHE homelessness is understood as an overarching theme that has relevant points of interaction with each of the other themes. This principle was reflected in the discussion. For example, most groups discussed homelessness in some capacity and related to other areas, such as fixed-term tenancies, support services and signposting (e.g. what can be done to prevent people become homeless), wider systemic issues such as affordability or allocation policies as well as health (including mental health, and what this can mean in terms of community cohesion, tenancy sustainment and so on).

What’s next for the North England and Midlands KE Hub?

For the North England and Midlands KE Hub, we are looking to move forward with a task-based and outputs-focused approach. Through the work of the first meeting, we began to highlight the particular challenges that we are facing in the North of England and Midlands and the need to be very clear about the evidence that highlights these challenges, as well as being able to do respond with a suite of solutions drawing on this evidence. We hope to use the expertise and energy within the Hub to address the key priorities identified.

One such key priority area that emerged from our inaugural KE Hub meeting, which we intend to be our first focus, was the need for a more holistic and strategic approach to place-making in the North of England and Midlands. Building on this, we intend to use the next KE Hub meeting to begin to develop an evidenced narrative that makes the case for a renewed focus on place-based regeneration, which reflects the distinctive challenges of the housing markets in the North of England and Midlands. The focus of our KE Hub will be to help collectively develop:

Integral to this ambition be the voices of residents, who will be able to support the narratives to go with the numbers. We are very fortunate to have the support of Housing Quality Network (HQN) as a partner for this strand of work and we will be working closely with them to ensure residents’ voices are brought into the work of our Hub and form the evidence-informed outputs that will be making the case for better place-making in the north.

If you are interested in this forthcoming work, please do not hesitate to get in touch.