This is the third in a series of blogs that sets out the results from CaCHE’s approach to co-producing research priorities. It draws together the priorities emerging from the first meeting of the Northern Ireland Knowledge Exchange (KE) Hub and the Residents Voice Focus Group.

The prioritisation event, which took place on 19 June 2018, was attended by 24 KE Hub members representing a broad range of public, private and voluntary stakeholders. Prior to the meeting, a short online survey was circulated with the aim of providing some initial thoughts from members that would stimulate discussion during the prioritisation exercise. There were 15 responses from Northern Ireland (NI) Hub members suggesting a total of 45 research priorities. These are summarised below, where the size of the word reflects the number of participants who mentioned the issue. The single most important issue was clearly housing supply, an issue that featured prominently in other parts of the UK too. However, NI Hub members placed more emphasis on community than elsewhere in the UK, but conversely more specific housing needs (e.g. those of the elderly) did not feature as prominently in NI.

A discussion of these results was followed by a short provocation given by the Chair of the NI Hub, Dr John McPeake, who highlighted two important issues: the importance of not losing sight of existing properties as a key source of housing supply (via relets and house sales) and the need to critically examine the assertion that the planning system is a significant factor in causing low supply. The roundtable discussions that followed resulted in 3 key issues emerging from each discussion, priority issues that were guided by the agreed UK-wide evaluation criteria. 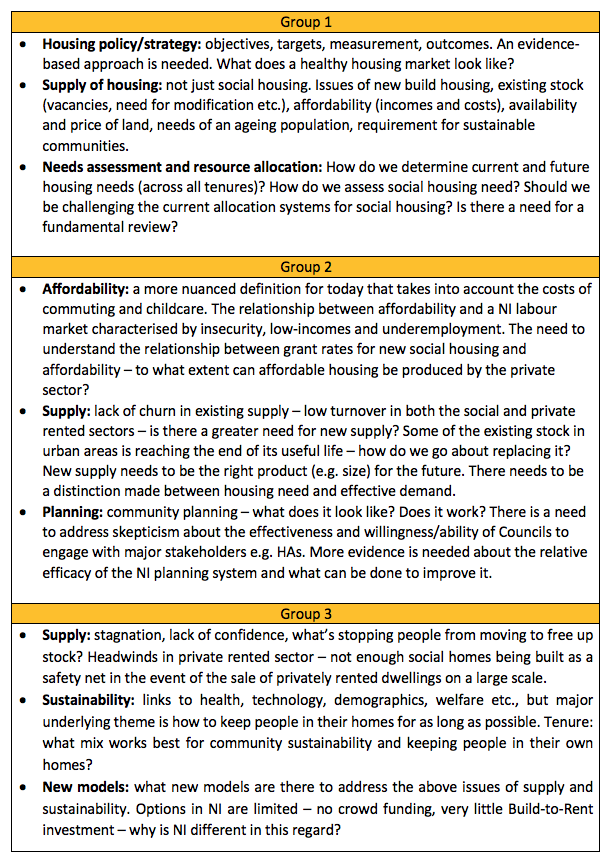 Following a session comprising feedback from each table and further discussion the following three key multi-faceted priorities were agreed as outcomes for the NI Hub as a whole:

The Residents’ Voice Focus Group (RVFG) met in the offices of Habinteg Housing Association in Derry/Londonderry. The meeting was facilitated and supported by Supporting Communities (an independent charitable organisation that champions tenant and community participation in Northern Ireland), who invited the 12 residents who currently comprise the Department for Communities’ Housing Policy Panel to participate. The Housing Policy Panel is a consultative body established approximately a year ago to ensure tenants’/residents’ rights and concerns are taken into account by the Department for Communities at a strategic level. Ultimately only four members could participate in the actual discussions, two of whom were housing association tenants, one a Housing Executive tenant and one an owner-occupier. Despite the small number of participants a lively discussion ensued. Each of the four participants wrote down their three key issues: 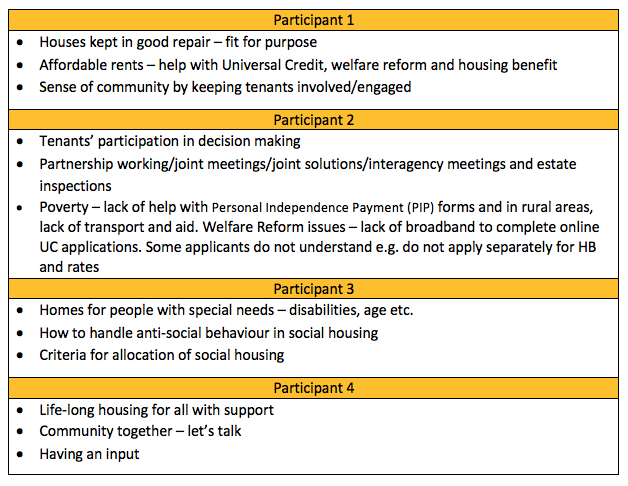 Each participant was given the opportunity to present the thinking behind their choice of priorities. This was followed by a concluding session, chaired by Colm McDaid, Chief Executive of Supporting Communities acting as independent facilitator, from which emerged the RVFG top three priorities:

Comparison of the top priorities emerging from the NI Hub meeting and the Residents’ Voice Focus Group confirms the importance of taking the views of both into consideration when determining CaCHE’s future research priorities and projects. There were some important similarities between the priorities of the Hub members and those of the residents, for example, the emphasis on affordability and the importance of recognising the interconnectivity of the sectors of the housing market in order to successfully address the key issues highlighted. However, there were also some significant differences in emphasis. In particular, while Hub members prioritised more strategic issues such as agreement on what an ‘ideal’ housing market would look like and the challenge of undersupply, residents focused much more on the daily issues that confront them: the need for a better quality repair service for the existing stock and how to ensure the tenants’ voice has more of an impact on policy and practice, addressing poverty and the challenges of Welfare Reform. Overall, the priority issues agreed by both groups in Northern Ireland are all well represented in CaCHE’s future research priorities.