This blog is part of a series on the CaCHE approach to co-producing research priorities. The first, outlines the thinking behind our approach, and the methods used; the second reports on the aggregate results, listing the top ten research priorities identified by members of our “regional” knowledge exchange hubs and local tenants’ groups and organisations; and this, the third instalment, summarises the results from Scotland, drawing out some of the issues specific to Scotland. The results from other parts of the UK will be published over the coming weeks.

Prior to each hub meeting, a short survey was sent to members to generate some priority issues in advance of, and to help kick-start the discussion during, the Prioritisation Workshops. There were 21 responses to the Scottish survey, resulting in a total of 66 priorities; the key themes are summarised in the Wordle below (the larger the word, the more prominently the issue featured in survey responses): 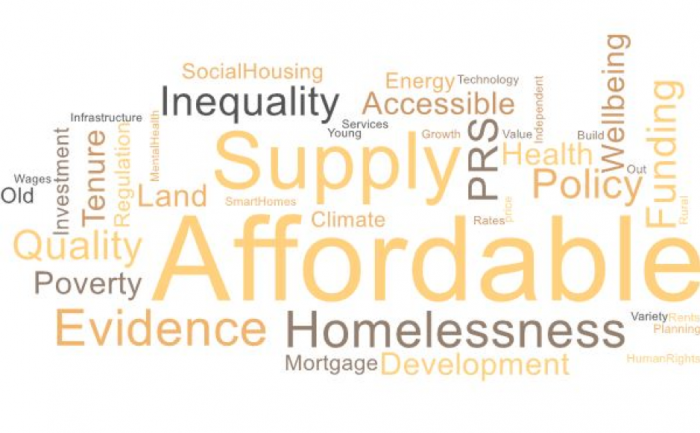 While these results are not based on a representative sample, it is perhaps not surprising that the issues of supply and affordability dominate. In relation to supply, the focus was on both the level and the suitability of supply. ‘Suitability’, in this sense, refers to tenure mix, the quality and accessibility of housing, and housing needs of specific demographics, especially the elderly. Almost one-quarter of responses fell into this category. Specific policy issues, including social housing, climate change, energy efficiency, mortgage support, fuel poverty, and mental health, accounted for another 20% of responses. Homelessness featured prominently in survey responses (but not during the prioritisation exercise) with connections made between issues of homelessness, mental health and wellbeing. Land shortages and planning constraints also featured among responses.

Following a short discussion of the survey results, hub members formed 5 small groups. Within these groups, each member championed their own top three priorities before engaging in a deliberative and iterative process to whittle these down to three high priority issues per group. The priorities identified by each group were as follows: 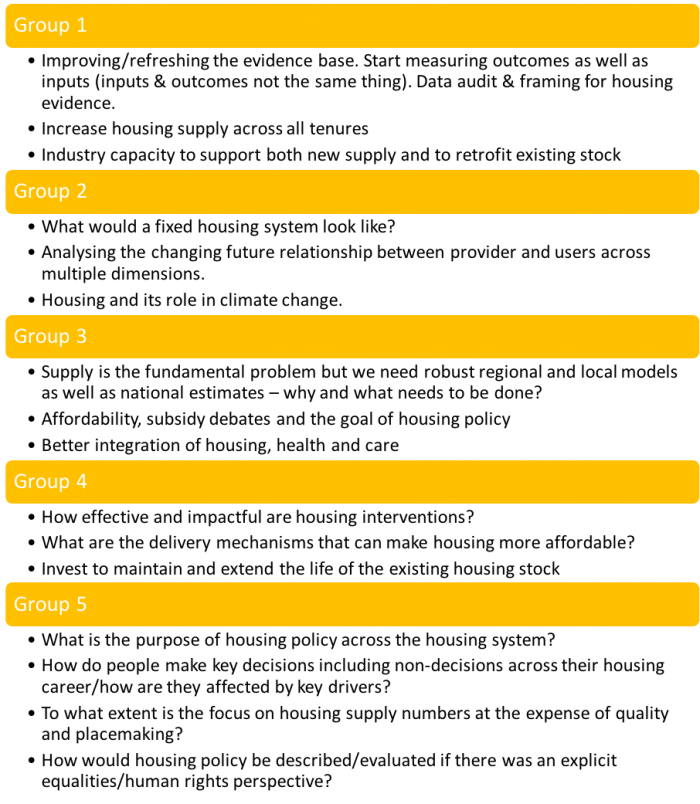 A plenary discussion followed, during which the following three issues were identified as among the most pressing:

The Scottish Residents’ Voice Focus Group was organised and delivered in collaboration with the Tenants Information Service (TIS). The group was comprised of 12 (mostly) social housing tenants, all female, from across the Central Belt. We began by asking: “What are the main housing issues and problems in Scotland?” An open discussion followed during which residents identified the following issues: 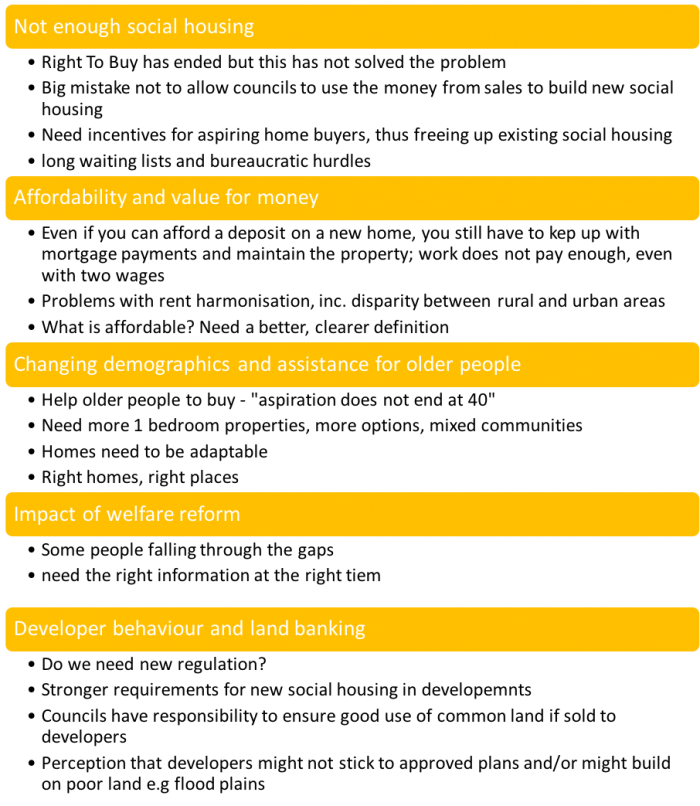 Some of the issues identified during the open discussion are clearly very similar to the priorities identified by members of the Knowledge Exchange Hub. Note again the prominence of supply and affordability issues. Residents next formed three separate groups and worked through a truncated version of the prioritisation exercise. These more focused discussions produced the following priority issues: 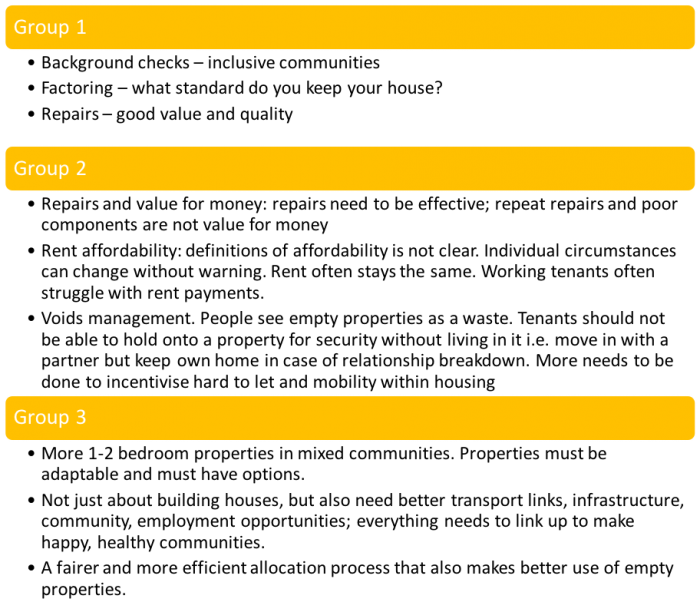 There were a number of similarities and differences in the priorities identified by hub members and residents. First, supply and affordability featured prominently for both groups. Hub members tended to emphasise the suitability of housing supply, whereas residents focused on the need for more social housing. Both agreed that we need a better definition of “affordable”. They each drew on different kinds of evidence which also helps to explain some of the variations in issues identified as among the most pressing. Residents tended to draw on lived experience and highlighted issues with repairs and value for money, as well as the problem of empty properties, neither of which featured prominently in discussions with hub members. Hub members also drew on their own experience but tended to emphasise more structural questions: how can we increase supply; what are the delivery mechanisms for making housing more affordable? It is clear to see, from the aggregate results, the influence that Scottish stakeholders have had in terms of co-producing our research priorities. The results reported above are reflected, in particular, in the following CaCHE priorities: housing affordability; increasing housing supply; policy evaluation methods; health, care and housing; and, of course, what does a fixed housing system look like?

Dr Gareth James is a Knowledge Exchange Associate for the UK Collaborative Centre for Housing Evidence.