This blog summarises the results from the South and South West England prioritisation exercise which took the same format as in the four other regions and helped inform the top 10 CaCHE research priorities for 2018-2020 which were published earlier this month.

The first meeting brought together 22 members of the CaCHE Southern England Knowledge Exchange Hub[i]. It was held at Nationwide, London on 11 June.

In advance of the meeting, a short online survey was sent out to hub-members and tweeted more widely to help generate some issues in advance. We had 26 responses (11 from Hub-members) yielding 75 priorities in total, which coalesced around five themes: homelessness; lack of supply; lack of affordable housing supply; the importance of building homes in the right places; and the quality/suitability/sustainability of new and existing housing.

After these findings were presented, hub-members were then split into five groups and asked to agree upon three key priorities each. The priorities were: 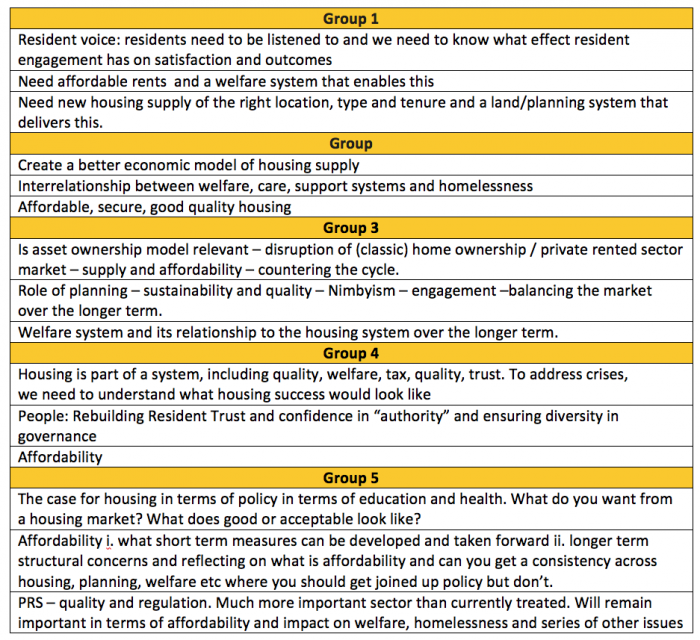 In the final plenary session, Gavin Smart, Deputy Chief Executive of Chartered Institute of Housing and CaCHE Director of Communications and Knowledge Exchange, suggested the 15 priorities above could be categorised into 4 ‘higher-level’ issues: affordability (taking into account people’s commute times and employment); homelessness; person/community-centred approaches (resident trust and governance); and more fundamental issues like defining success, finding out what people want from housing, and exploring alternative/disruptive systems for delivering housing.

The Residents Voice Focus Group took place on the evening of on 13 August 2018 at the Chartered Institute of Housing in London. It brought together 4 social rental and 4 private rental tenants, with a good age and gender balance.

We began by asking the group “what is wrong with housing in Southern England?” to which they responded with six main issues: lack of social housing;  problems with the PRS (unaffordable, insecure, lack/opacity of tenant rights); poor quality of new supply; treatment of housing as commodity rather than infrastructure; empty homes; and high land prices

We then split the room into two groups who were each asked to agree upon three main issues, generating the following priorities;

There is significant overlap between the priorities identified by residents and hub-members above and the 10 overarching research priorities that came out of the UK-wide prioritisation exercise.

Both residents and hub-members noted the need to improve affordability but different solutions – rent controls, more housing supply, more social housing – were emphasised by different groups. To reflect this diversity, CaCHE will be undertaking research on the price elasticity of housing supply (in Northern Ireland), as well as an international evidence review of the effects of rent controls and regulations.

Residents also voiced major concerns about the opacity and lack of renters’ rights in the PRS. In response to concerns like these, we have plans for a three-year research programme on dispute resolution and redress, as well as other socio-legal and economic research on the PRS (with the Dispute Service and Safe deposits Scotland).

Finally, the issues of homelessness, tenant voice and engagement, design of new supply, and ‘what a fixed housing market would look like’, were all raised in the sessions above, and are all prominent in the final 10 CaCHE research priorities.

Dr Chris Foye is a Knowledge Exchange Associate for the UK Collaborative Centre for Housing Evidence.

This blog is part of a series which outlines our approach the co-producing the CaCHE research priorities. It follows a blog by Dr Gareth James which summarises the results from the Scotland meetings.