This is the first in a series of blog posts on the CaCHE approach to co-producing research priorities. Our approach to knowledge exchange, more generally, was the subject of an earlier post, in which we introduced plans to run six Prioritisation Workshops – with the five knowledge exchange hubs and our International Advisory Board – as well as five Residents’ Voice Focus Groups in each part of the UK. This post covers the thinking behind our collaborative approach to identifying key housing issues and problems in the UK and the method used to co-produce research priorities. This will be followed by a blog from our Director, Ken Gibb, on how the data were used to produce a list of research priorities which now form a significant part of the overall CaCHE research agenda for 2019/20. The series will also include blogs from Scotland, Wales, Northern Ireland, North England and the Midlands, and South England and the South West, each reporting specific results from that part of the UK.

First, a quick note on the concept of co-production. Bev J. Holmes defines co-production as ‘the collaboration between researchers and others with a stake in a project in its governance, priority-setting, conducting of research, and knowledge translation’. As she points out, it is not a new concept and is rooted in action-based research. There are incentives for policymakers, practitioners and academics to engage in the co-production of research. In housing, at least, there appears to be a shift (back) towards evidence-based policy. Research councils also place a great deal of emphasis on engaging with ‘user communities’ and achieving research impact. Steve Martin (2010) suggests that engagement occurs along a spectrum: at one end, there are models involving relatively low levels of practitioner engagement (e.g. as providers of data or passive recipients of research findings); and, at the other end, policymakers and practitioners “play an active role in commissioning, overseeing and learning from studies”. Higher levels of engagement, he suggests, should enhance the prospects of research utilisation and, in turn, generate impact.

Our approach to co-producing research priorities borrows from this literature. It is also informed and inspired by the Tobin Project in the US. Founded in 2005, the Tobin Project is an independent, non-profit organisation, which aims to mobilise, motivate and support scholars across the social sciences and related fields to deepen their understanding of significant challenges facing society over the long term. It employs a model for identifying priority research areas with the greatest potential to improve society. The model consists of five stages as follows: 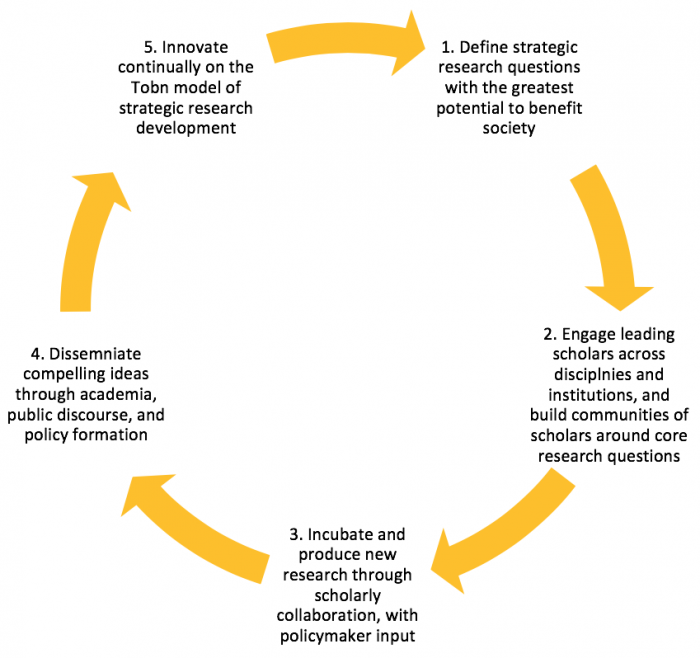 We adapted this model to deliver our own series of Prioritisation Workshops. Instead of engaging only with scholars, we ran our workshops with our knowledge exchange hubs, whose membership includes policymakers, housing researchers and practitioners, industry experts, and third sector organisations, and enabled them to identify the most pressing housing issues and problems facing the UK and its constituent parts. The workshops took the form of a deliberative and iterative process during which small groups of stakeholders agreed on a shortlist of high priority issues before attempting to reach consensus across the room on the “top 3” priority issues. There were no strict rules, but, similar to the Tobin Model which focuses on research questions with the greatest potential benefit to society, we did ask participants to keep the following evaluative criteria in mind when deciding on their priorities: 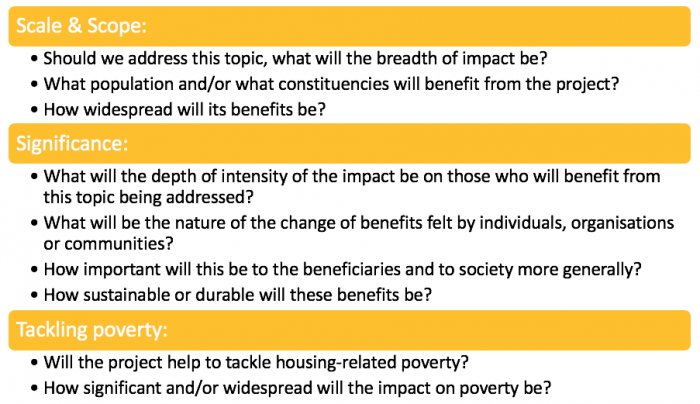 In parallel, we ran a series of Residents’ Voice Focus Groups with assistance from local tenants groups and organisations. Here, we adopted a hybrid model approach, combining a traditional-style focus group with the Tobin-inspired Prioritisation Workshop described above. In addition, we presented residents with the priorities identified by members of the regional knowledge exchange hubs, giving them an opportunity to respond and to consider how, if at all, the priorities identified by policymakers and practitioners changed their own thinking.

We think we sit at the higher end of the spectrum described by Martin (2010) and plan to continue to engage with our knowledge exchange hubs and local tenants’ organisations to co-produce and jointly deliver CaCHE research projects. The next blog post describes how the data were used and presents the results in the form of a list of UK-wide research priorities. This will be followed in subsequent weeks by blog posts from each of the five knowledge exchange hubs, drawing out some of the “region”-specific results that fed into the development of our overall priorities.