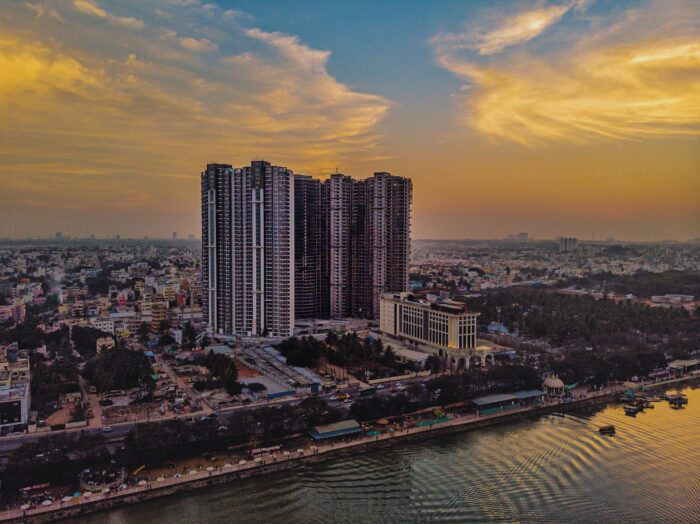 In this blog Noelene Marisa Yesudas, a doctoral candidate at the University of Glasgow and the University of Edinburgh looks at the jarring socio-economic divide of high rise living in India. Marisa’s work and research focuses on comparative equalities of luxury high-rise housing in the Global North and the Global South.

Today, if you visit an Indian city as a newcomer, it will not take long to differentiate between rich and poor neighbourhoods. The difference in lifestyles of people living in the same city leads to a form of segregation that is probably more pronounced than during colonial times. Various studies show that though the country has a thriving economy, it has not been enough to tackle poverty and limit rising inequalities. One of the physical manifestations of this jarring socio-economic divide are luxury high-rise residences, now a ubiquitous sight in almost every major Indian city.

India’s IT capital, Bangalore, serves as a potent example of this. The city is home to an affluent working class in the tech industry, attracting many high-net-worth individuals. Most have residences in ‘gated vertical cocoons’ that appear like fortresses, with state-of-the-art surveillance infrastructure and on-site security services. The wide-ranging private services available to inhabitants include recreation areas, sports facilities, clubhouses and even supermarkets. With little need to leave the luxury confines of the gated tower, for many, the vibrant and culturally rich city of Bangalore is a mere picturesque cityscape in the background; not necessarily a place they are truly part of.

Luxury high-rise communities create a distinct spatial and social divide between those who can afford them and those who cannot. The buildings are purposefully designed to segregate. Many have separate service areas, like service corridors, lifts and ‘servants’ quarters. Street vendors, who are a common part of the street life of Indian cities, are kept away from the communities’ boundaries by patrolling guards. The high-rise form of these buildings can also negatively impact surrounding neighbourhoods: they cast long shadows that block out natural light and affect the physical and mental well-being of the often much less well-off communities living around them.

The sense of inequality associated with vertical developments also impacts the ‘internal governance’ of these buildings. During the period soon after a luxury high-rise development is completed and occupied, the building’s developer tends to oversee the community’s maintenance and governance. But when the developer is no longer involved, the owners hire a management agency. However, if the developer sells the management rights before the project’s completion, future owners are restricted in their choices. In many cases, voluntary Resident Welfare Associations (RWAs) are also established to guide the long-term management of the building and community. However, the “resident” word is usually limited to owners, thereby making the overall internal-governance model less inclusive, as many people rent units and cannot partake in building governance.

Other differential impacts between dwellers and non-dwellers are subtle but equally pervasive, especially given the current global pandemic. When COVID-19 first peaked in India, RWAs (or management agencies) stepped up in their attempt to ‘tackle’ the pandemic. The local administrative body (i.e., the Bruhat Bengaluru Mahanagara Palike) released a series of COVID-bulletins entrusting RWAs with responsibilities. Some of the instructions indicated:

RWAs followed these guidelines in varying ways. For example, the job cycle of blue-collar workers was upended. In some cases, house helps, reliant on their employment in luxury high-rises, were temporarily suspended from working in the buildings and only allowed entry to serve specific groups like the elderly and disabled. Stories of the snowball effect of house helps displaced from work, many of whom are the sole breadwinners of their families, meant that in some cases their children had to drop out of school. This brings to light the fundamental challenge of urban equity in the luxury high-rise hinterland. A year on, as India faces a devastating second wave of the pandemic, it is essential to ask: can local management agencies take more measures towards bridging this inequality?

Given the above scenario, income is often considered a priority over health. In many cases, house helps and other blue collar workers employed in luxury high-rises have no contingency options for emergencies. One way to address this, perhaps, could be to set up a voluntary RWA fund so that the wealthy residents of luxury high-rises can provide financial support to the army of workers maintaining their communities. RWAs could also advocate for the Government’s ‘Vocal for Local’ agenda by tying up with local vendors, meaning residents procuring a certain percentage of their products to provide a steady income or providing designated days/time slots for sale within the building safely. Such a step might also help residents in and around luxury high-rises interact more organically.

In India, the pandemic has certainly shed new light on existing inequalities between the vertical dwellers of luxury high-rises and surrounding communities. For a dynamic city like Bangalore, the momentum of luxury residential high-rise development will continue to push the city’s vertical limits, creating new economic, spatial, and social orders in the neighbourhood and the city. However, this housing typology can be made more sustainable and resilient through greater inclusivity achieved through better integration with the surrounding social-economic ecosystem – this is important in the current unprecedented times in India and must be a call for more collective action.

Image by KshitizBathwal via Creative Commons, CC BY-SA 4.0 and all information and license details can be found here.