In May 2019, the MHCLG Select Committee invited written submissions to inform their inquiry into the long-term delivery of social and affordable rented housing. In this response, we point to that research undertaken by the UK Collaborative Centre for Housing Evidence (CaCHE) which relates to the question set out in the Inquiry’s Terms of Reference.

We focus in particular on five papers published out the CaCHE Social Housing Policy Working Group which was set up to examine what the evidence has to say about the future role(s) of social housing.

As Professor Ken Gibb (University of Glasgow) sets out in his paper Funding new social and affordable housing, more sub-market housing can only be produced by altering one or more of the four fundamental elements of housing development: equity, financing, land/density, and construction costs. 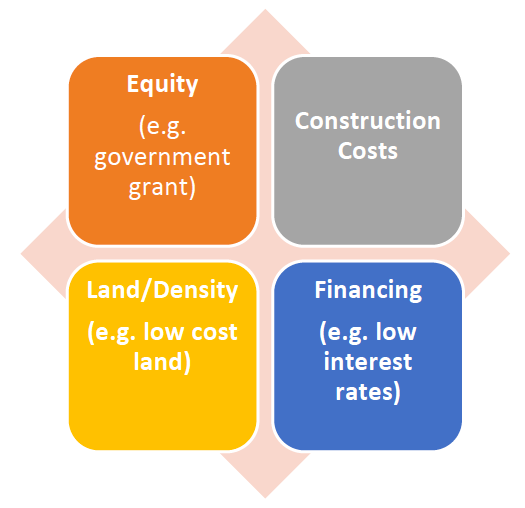 The most recent quadrant to be altered in England is finance. In 2018, Theresa May announced her intention to lift of the ‘borrowing cap’ and allow English councils to borrow from their Housing Revenue Account. Removing this constraint is a necessary condition for substantial new investment in council housing in England but, as Prof. Ken Gibb (University of Glasgow) and Tony Cain (ALACHO) argue in the CaCHE blog, The end of council borrowing caps? it is not a sufficient one. Significant barriers remain in the form of Right to buy and borrowing risk.

The contrast with Scotland is instructive. As Dr Bilge Serin, Prof Keith Kintrea and Prof Ken Gibb (University of Glasgow) discuss in their 2018 paper, Social housing in Scotland, the proportion of the housing stock made up of social rental has roughly stabilised since devolution (whereas in England, it continues to decline). Between 2011-2016, the Scottish government’s Affordable Housing programme produced more than 22,000 social housing units; 2.4 times greater (pro-rata) than the number produced in England in the same time period (Stephens 2017). Serin et al (2018) identify several factors to explain this divergence, including the abolition of the Right to Buy, the absence of a council borrowing cap, and relatively high grant funding to both councils and housing associations.

The examples of Wales and Northern Ireland, as explored by Dr Bob Smith (University of Cardiff) and Prof. Joe Frey (University of Ulster) respectively, are also worth noting. Since devolution, the Welsh government has gradually sought to phase out the Right to Buy (which reduced the 1981 social housing by 45%), abolishing it for all new and existing properties in January 2019. Whereas, in Northern Ireland – where approximately 70% dwellings in the social sector are owned and managed by the Northern Ireland Housing Executive – Right to Buy remains largely intact.

It does not make sense to look at the supply of social and affordable housing in isolation. The financial and regulatory environment in which housing associations and local authorities are forced to operate also has a wider-ranging set of implication for how the social housing sector is governed. This relationship is explored by Prof Alex Marsh (University of Bristol) in his paper, Social Housing Governance. It identifies four main trends among housing associations (increased organisational scale; expanded development and diversification into intermediate and market housing; more intensive management of existing housing assets; and more complex and risky forms of finance) and examines the extent to which these have been in tension with the established social values and long-term resilience of the sector.

All papers produced as part of the Social Housing Policy Working Group can be found on the webpage.

If you have any questions about the papers then please contact the relevant author(s) whose email addresses can be found on the CaCHE staff page.

If you have any general questions about the work of the Social Housing Policy Working Group, please contact Dr Chris Foye or Dr Gareth Young.