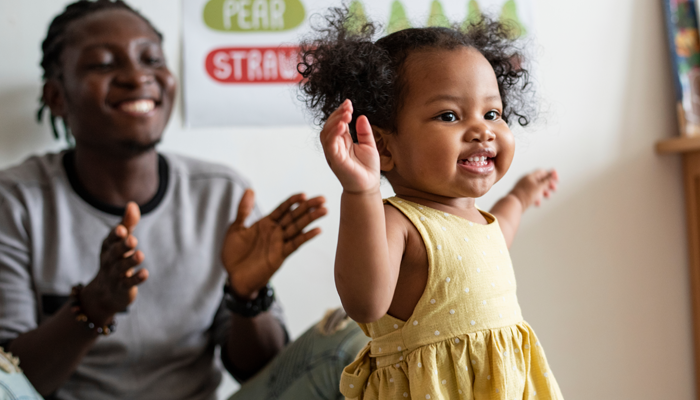 Dr Lisa Garnham from Glasgow Centre for Population Health and Dr Steve Rolfe from the University of Stirling give an overview of an evidence review exploring tenant participation in the private rented sector, which was funded by the CaCHE Knowledge Exchange Fund.

While tenant participation and engagement in social housing is well researched, the same cannot be said for the private rented sector (PRS). We recently completed a literature review on tenant participation in the PRS that looked at both academic and non-academic sources.

We found a diverse but really very small evidence base on this topic. It showed that, despite the diversity of tenants in the PRS today, collective action is growing and can be successful. However, too often activists’ energy is expended in ensuring that existing rights are enforced, leaving limited scope to progressively improve tenants’ rights and conditions.

Over the last 20 years, the PRS has grown and changed in all parts of the UK. In Wales and Scotland, the sector has more than doubled in size since the turn of the century. In England and Northern Ireland, the PRS has now overtaken social housing to become the second most common tenure.

Alongside this, the PRS has evolved from acting mainly as a transitional tenure for students and people saving up to purchase a property. It now draws in more low-income households, families and older people, many of whom spend many years in the sector.

In response, policy makers in some parts of the UK have improved PRS regulation. In Scotland, in particular, the security of new PRS tenancies is now broadly similar to that of social housing, with substantial restrictions on ‘no-fault evictions’. However, there is still a substantial difference between the sectors in terms of tenant power. While social landlords are legally required to engage with and listen to their tenants, PRS landlords have no such duty.

Despite this, there are many examples from across the UK of tenants working together and generating change in the PRS. For example, in London, Eviction Resistance provide vital support for tenants facing eviction, helping people to stay in their homes long enough to find alternative accommodation, if not permanently. And in Scotland, Living Rent brought tenant voices to the fore in shaping new Scottish Government policies on PRS tenancies, and continue to support tenants and campaign for change.

Our search of the literature also threw up other examples from across the globe, covering a wide range of activities – from petitions, to picketing, to media campaigns – and housing outcomes – from legislative change, to court wins, to improvements to individual properties. The housing problems that stimulated these diverse examples of activism were surprisingly similar and typically revolved around poor housing quality, often alongside high rents.

Crucially, all of the evidence we reviewed pointed to the complex, long-term nature of effective activism. Activist groups spend significant time and energy building up assets, which include skills, relationships and reputations. These assets are then used to take advantage of various opportunities, such as offers of specialist expertise from outside organisations, government consultations, or moments of media interest.

This is not a linear process, but an iterative one that goes back and forth over a long period of time before any housing ‘outcomes’ can be seen. In our review, we saw that the most effective activism worked towards building assets and trying to create new opportunities, as stepping stones towards the ultimate goal of improving housing conditions.

In the meantime, activists often gain a number of personal benefits from their involvement in this process, for example developing various skills, growing their self-confidence and improving their self-worth. However, they also often pay a personal price, spending their time, resources and energy fighting for their cause.

We developed a diagram to try to capture these processes. It shows the housing problem that triggers activism, the iterative cycle of activism at its core, as well as the potential for both housing and non-housing outcomes. 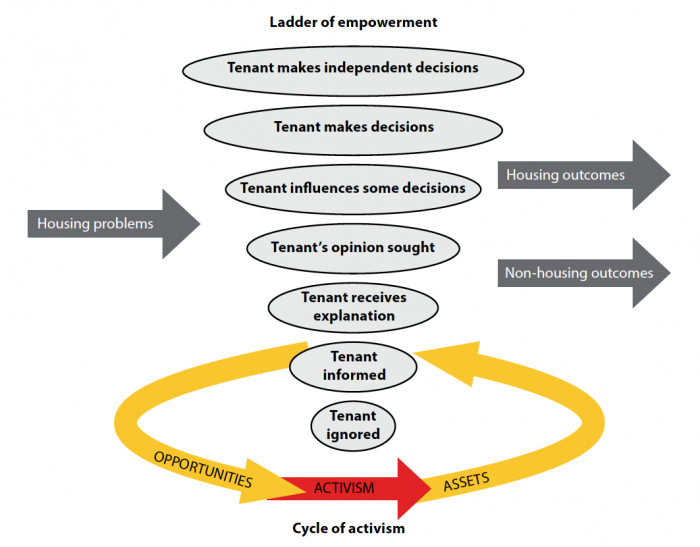 At the centre of this diagram is a ladder of tenant empowerment, based on Arnstein’s ladder of participation and engagement. Where the cycle of tenant activism is successful, tenants move up this ladder and experience greater power in and through their tenancies. Of course, its also possible for tenants to move down this ladder, when activism stalls, fails or cannot even get started.

Our review raises questions about whether policy change is needed to provide some statutory backing for tenant activism and participation in the PRS. Low-income and vulnerable households are most likely to benefit from such a change. They are especially likely to sit at the very foot of the ladder of empowerment, having less purchasing power to choose a good quality tenancy.

While policy makers have recognised the need to regulate the expanding PRS in some parts of the UK, there have, as yet, been no moves to give PRS tenants the same rights to participate as they would have in social housing. And the ways in which power might be more equitably shared between PRS landlords and their tenants remains an open question.

Dr Lisa Garnham is a Public Health Research Specialist at the Glasgow Centre for Population Health (GCPH) and Dr Steve Rolfe is a Research Fellow in Housing Studies at the University of Stirling.