These are the issues addressed in two new reports; they look at three questions – how should affordability be measured (we have to be able to measure it before we can solve it); what are the causes of changes in affordability (we need to understand the changes over time); and what is the impact of different policies designed to improve affordability?

In the UK, affordability is commonly measured by the ratio of house prices to earnings. However, the ratio has disadvantages; first, the measure commonly uses median house prices and earnings and, hence, does not consider outcomes across the broader range of households, particularly the target groups for housing policy. Those who are already owners benefit from a rise in the price to earnings ratio, but low-income renters and potential first-time buyers do not. A rise also makes it more likely that existing owners can purchase second homes or Buy-to-Let properties through the equity they have accumulated. Second, much of the increase in the ratio in recent years arises from a fall in interest rates and, so, affordability has not worsened to the extent that the ratio suggests.

In fact more relevant (but still imperfect) affordability measures can be constructed, which capture more directly the difficulties that renters have in meeting their rent payments and the probability that a current renter, at different levels of income, will be able to purchase a home. For example, our estimates suggest that a renter in the South East of England might need to have an income in the seventh decile before the household could afford to purchase a home even in the first house price decile (see Figure 1, below).

Whatever measure of affordability is chosen, house prices and rents are important in understanding changes over time. Perhaps despite common perceptions, the factors that determine house prices are well understood – incomes, interest rates, housing supply, credit conditions all play a role; furthermore the responsiveness of house prices to each of these factors has not changed much and the effect of a change in income in the 1970s is much the same as today. But since the earnings of younger households have fallen in relative terms over time (Figure 2), this contributes to the difficulties in achieving home ownership – housing problems are as much about the labour market as the housing market. Moreover, since house prices are responsive to both interest rates and credit conditions, the stance of monetary policy has a key influence on both house prices and the probability of home ownership – housing problems are as much about the macro economy as the housing market. There are important questions whether the setting of interest rates for general inflation targets is necessarily the same as that required to meet housing objectives and whether monetary policy has boosted investment demand for housing. 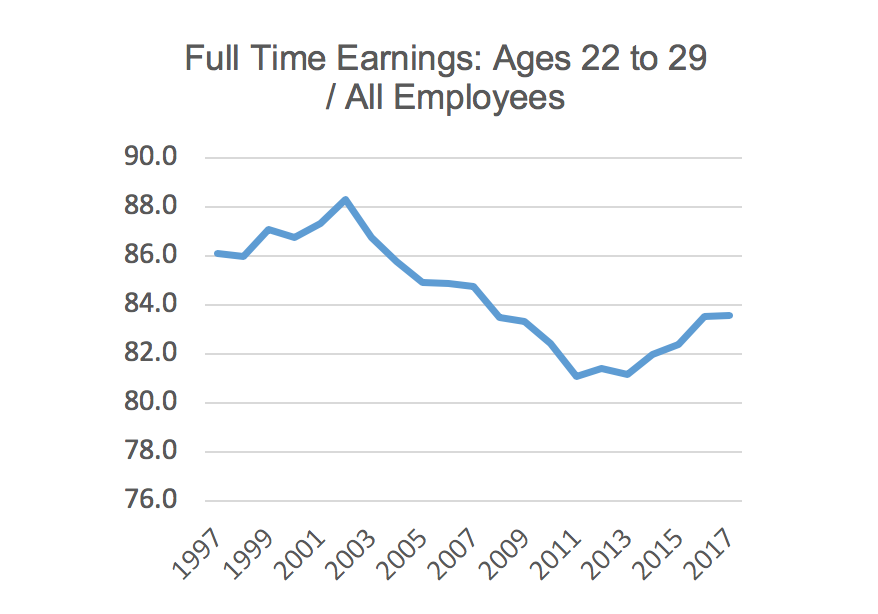 The impact of housing policies

Policies designed to improve affordability have concentrated primarily on increasing housing supply – and this remains the case today. However, although housing supply policies are important, we have known since the Barker Review of Housing Supply in 2004, that increases in supply have to be large and sustained to have a significant effect on prices.  In principle, policies designed to reduce housing demand can have a complementary (and large) effect. But attempts to cut demand probably entail additional taxation on existing home owners and even if policy changes were to be introduced over many years, this probably falls into the too difficult category.

But if supply policies lead to only limited improvements in affordability without very large increases in construction, cutting demand is too difficult, and macro policies have other objectives, what is left? Direct housing policies such as Help to Buy and other schemes which aim to ease the deposit constraints facing aspiring home owners primarily help those on the margins of home ownership and there remains a strong case for an expansion of social rented housing (but this entails addressing the borrowing constraints imposed by the requirements of the macro economy). However, it is important to remember that housing is primarily provided by the market and the market will still produce a solution even if the solution is not considered socially desirable – it is likely to entail lower rates of household formation and owner occupation and, of course, we have already seen both in recent years.

We recognise that housing affordability is a complex issue which attracts a diversity of opinions. This is why we invited comments on earlier drafts of both papers from a range of perspectives (see ‘Acknowledgements’ sections). It is also why, in the coming week, we will be hosting a range of guest blogs from those who commented on the papers, so that they have an opportunity to state their views on the different policy approaches to improving affordability.

Professor Geoff Meen is a Co-Investigator at the UK Collaborative Centre for Housing Evidence and co-leads the ‘Economy’ theme.