CaCHE Director, Professor Ken Gibb, provides an overview of the CaCHE international evidence which has informed the latest summary report from the Poverty and Inequality Commission.

Why is housing wealth Important?

Housing wealth inequality is comparatively unevidenced, in that while there is a large literature, it has not been brought together and synthesised. Our evidence review makes a contribution to filling that gap. The lack of evidence means that claims about housing wealth and its inequality are made that are anecdotal, partial or simply unfounded– and that is not the way to develop effective policy interventions or indeed debate the issue in the first place.

The second and substantive reason why examining housing wealth inequality is important is because the evidence suggests it is an important source of unfairness, it limits life opportunities and it impacts adversely on the housing system.

What did we do?

We conducted a literature search restricted to two large on-line bibliographical databases: SCOPUS and Web of Science. We restricted our search to 2008-2019; and, the geographical coverage of the review focused on the UK, EU, Australia, New Zealand, the USA and Canada. This yielded a final sample of 429 references, which after careful analysis for relevance and other inclusion criteria yielded 132 documents reviewed by the team (further details on our approach can be found in the review). 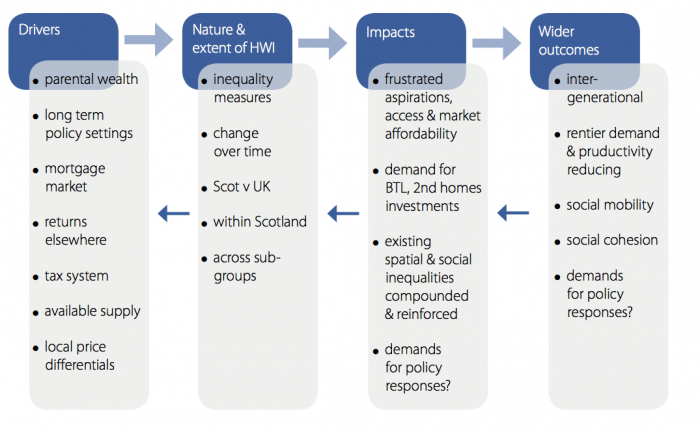 Overall wealth in the UK and in Scotland has increased sharply relative to income over recent decades and the absolute gap between the richest and poorest has expanded considerably. Housing wealth inequality is nearly twice as unequally distributed as incomes are in Scotland and Britain. Although rising homeownership rates initially moderated inequality as homeownership grew, this is no longer the case.

Inequality across different age bands is growing and changing (younger households are no longer on the wealth escalator as they once were) but this is arguably no less significant than inequalities within age cohorts. Because of the patterns and trajectory of house prices and patterns of ownership of property, there are also considerable implied variations in housing wealth within Scotland locally.

The economics literature specific to housing wealth tells us that high and/or rising housing prices and rents have direct effects of housing wealth. There are also significant impacts on stability, savings and productivity, which may have feedback effects on wealth patterns and social mobility. The policy decisions relating to housing wealth and consumption impacts have generally been the purview of central banks and national Treasuries. This is despite the growing evidence that regional variations in housing wealth (including in Scotland) are important. Affordability problems and local housing shortages also matter to the economic performance of cities and regions and can make them less competitive and economically dynamic, which in turn has further income and wealth consequences for citizens.

Asset-based welfare and its impact on inequality is shaped both by tenure and whether people affected are property-rich or property-poor. Despite the existing possibilities to draw down housing wealth for consumption or welfare, few older people actually do so in practice. Housing wealth is generally accessed only as a last resort, as a safety-net, with most people reserving it as precautionary saving (old-age care) and as a bequest to the next generation. Given young peoples’ difficulties in entering homeownership, financial and housing wealth is increasingly transmitted down the family generations in the forms of gifts or co-habitation.

Housing wealth inequality may well inhibit social mobility through multiple channels advantaging those already with the financial capacity to support their children – from affording better schools to assisting housing investment decisions. However, more evidence is required.

A number of carefully-designed quantitative studies have addressed whether inequalities in housing wealth may have measured health and well-being impacts.  The evidence is mixed in that several studies say that  there is such an impact from housing to health but at least one careful (UK) study suggests that there are intervening factors (e.g. neighbourhood quality, local amenities and economic opportunities all of which vary at the same time as housing wealth), so it is not therefore a pure wealth effect on health outcomes.

Intergenerational inequalities are much-debated, in part due to how we define ‘generations’ but also how we carefully measure different cohorts and control for confounding factors. Between and within-generation inequalities needs to be analysed together – both are important. Moreover, while generational inequality may be ‘apparent’, it may be driven by wider structural inequalities associated with labour-market precarity and housing unaffordability, among other things. The increasing interest in the use of gifts and inheritances  related to housing assets held by older generations reflects two other important points: one that dysfunction in the housing market necessitates such inter-generational gifting in the first place, and second, that we should not ignore the basic fact that the windfall of receiving gifts to enable e.g. entry to ownership is unavailable to many millions of people.

Policy on housing inequality connects to the reform agenda on wider wealth inequality and fairness. Wealth inequalities regularly feature in discussions of tax and public policy reform. Housing tax policies, broadly conceived, offer a suite of potential policy reform instruments to consider, though specifically Scottish measures need to recognise the mixture of devolved and reserved fiscal policies that would have the most leverage in reducing housing wealth inequality. A key constraint is reformability – the technical, political and acceptability of wealth reform. While much of the focus is on this tricky question of the political economy of reform, there are also many practical problems, for instance, as demonstrated by how hard it is to progressively reform property taxation.

Finally, it is worth noting that the Scottish Government has recently set out its vision and principles for housing to 2040. This argument stresses that a ‘well functioning housing system’ should aim to stabilise real house prices and reduce dependence on property as a store of wealth. In this sense, reducing housing wealth inequality is being directly linked to the performance of the wider housing system. One way to reduce housing wealth inequality is undoubtedly to curtail real house price inflation over time. It’s less clear how this is to be done in practice.

Visit the Poverty and Inequality Commission website to learn more about this research and wider work.

Photo by Kirsten Drew on Unsplash.