We need more ambition to make housing affordable for everyone

These two excellent papers by Geoff Meen are a welcome reminder that ‘demand and supply side policies […] are complements rather than alternatives.’

Whether housing is affordable is partly a value judgment. Cardboard boxes are pretty affordable, but few consider them acceptable housing.

Google Trends indicates we rarely mention ‘food affordability’, or ‘clothing affordability’. Instead, we talk about poverty. Why is housing different?

In what other industry do we ask whether affordability is adequate, instead of aiming to make products, after preventing environmental damage, as affordable as possible?

The homeowning middle class has subverted the housing debate. The dirty little secret is that most UK governments have not really wanted to make housing much more affordable. They know that rising house prices raise consumer confidence; and higher consumer confidence increases the chance the incumbent government will get re-elected.

For decades, governments have made loud noises about increasing affordability while quietly doing little. The Terms of Reference to the Letwin Review make the goal of ever-increasing house prices explicit. Can you imagine any government targeting increases in prices of food or clothing?

The difference, of course, is that most voters do not own farms or clothing factories. But most do own a home.

The misery of the current housing system is a design feature, not a bug. Without many private tenants desperate to buy a home, house prices might fall, and then the government.

If we want to make housing as affordable as possible, any substantial excess of house prices over the cost of building homes where most wanted is an ‘over-valuation’, as Ed Glaeser points out. £3.7 trillion of the circa £5.5 trillion value of UK housing is the unnecessary excess of the price of homes over the cost of building them.[1] That cost could itself be further reduced by construction innovations currently prevented by lack of scale and the oligopoly in housebuilding. A century ago, a car cost roughly the same as a house. Why has car manufacturing made vastly more progress than housing?

Given the massive difference in high demand areas between the cost of housing and the cost of building it, homes across the country could and should be colossally more affordable. If they were, many people would choose to have far more space. Are they ‘over-consuming’ now or just using what someone deems more than their fair share, given our failure to build enough of the right kind in the right places? Why shouldn’t a social housing tenant have a spare bedroom if they want? Do we talk about ‘over-consumption’ of shoes, clothing, or music?

Some wish to limit consumption of housing to reduce environmental damage. But that often leads to even more environmental damage from long-distance commuting and from money spent instead on things like cars or flights abroad – not to mention, without a politically feasible rationing system to share the limited housing stock fairly, ever-increasing and unforgivable misery for many.

Should the campaigners for the abolition of the Corn Laws instead have contented themselves with trying to find methods to share the remaining food out more fairly?

To implicitly support housing scarcity without having – and executing on – a politically practical plan for sharing it out much more fairly, quickly, is to be complicit in condemning millions to stress and lost opportunities. And to assert, without serious research, that we cannot get back to historic building rates is unacceptable.

Since the 1940s England and Wales have never got back to the net percentage growth in the number of homes achieved in the 1830s, let alone the much higher rate of the 1930s, as Neal Hudson has shown. Let’s stop pretending history started after the Second World War. 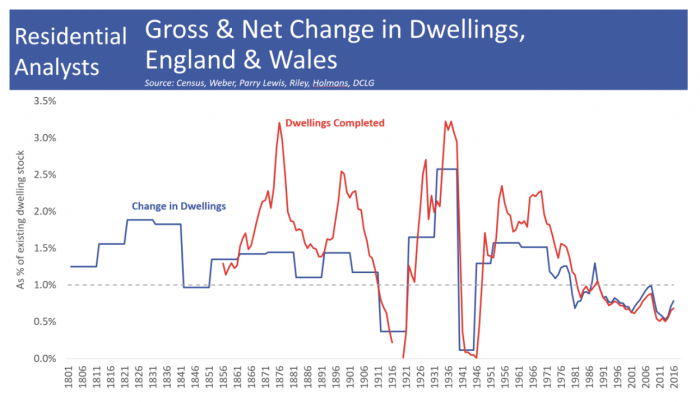 We used to build many more homes. When did we give up even trying?

When did a cosy consensus of inevitable scarcity emerge, without any serious study of the political challenges or, say, the research on common pool resources and transitional gains traps to find ways out of this housing famine?

Had one-hundredth of the energy spent on the housing crisis instead been focused on solving the political barriers to fixing housing, the crisis might be over.

It is bad enough to unreasonably doubt the possibility of something that has never happened, like the physicist announcing flying machines were impossible. But giving up on something we have achieved in prior centuries is a betrayal of the poor and everyone who would like a better, cheaper home.

There are reasonable arguments that our failure to build enough homes, in addition to being a major cause of inequality, has led to a substantial impairment of average incomes. That overall loss to society is little studied but is an important unifying theme to get a majority to support building much more.

Our campaign is searching for politically realistic reforms to get to plentiful housing, with better, fairer, more inclusive places and the support of local communities. Astonishingly few are working to solve the political challenges, using lessons from other social sciences. When we published the two best suggestions we had seen so far, one was essentially adopted within a year. Our current draft YIMBY Handbook collects our thoughts so far on how to solve the politics to end the housing crisis.

I trust CaCHE will continue its valuable contributions to this urgent and crucial debate.

John Myers is Co-Founder of London YIMBY, a grassroots campaign to end the housing crisis with the support of local people.