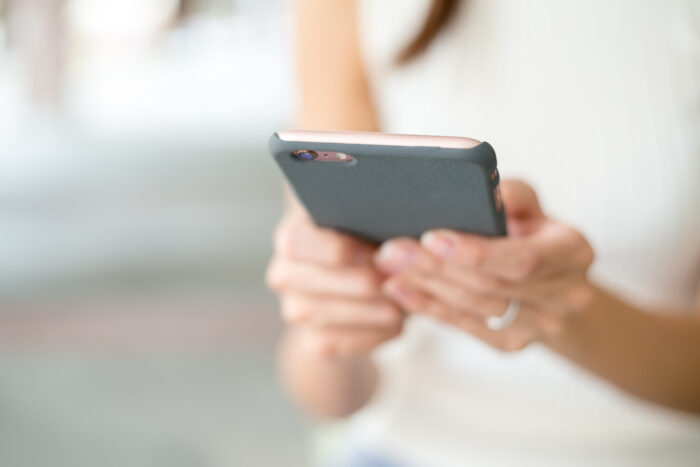 In this blog, Adriana Mihaela Soaita from the University of Glasgow looks at how COVID-19 restrictions brought renewed interest in remote research methods. These are however far from new.

If we refer to the method of the interview alone, the oldest study using both a telephone survey and telephone interviews was published in 1940 (according to Scopus). Meanwhile, technological innovation has somewhat blurred the difference between remote and face-to-face interviews, e.g. through remote photo-elicitation interviews or video interviews. Clearly, remote interviews reduce the cost of reaching geographically dispersed participants while producing rich data. However, even transcription costs may be prohibiting, as in my recent CaCHE research analysing private tenants’ renting experiences during the COVID-19 pandemic. Hence, I decided to explore the potential of what I refer to as an ‘online written interview’ (OWI). In my knowledge only one paper employed a similar approach, termed there an online qualitative survey but there may be others unidentifyed.

Using Bristol Online Surveys, I designed a short online questionnaire of 24 mandatory questions, of which 11 were open-ended. Every question was further explained through prompts in a similar way to structured interviews. To emphasise the difference between the question and its prompts, I used bold, black lettering for the former and italic, grey lettering for the latter (Figure 1). Sometimes, I encouraged participants to write as much as they wished. The OWI was carefully piloted with eight relevant volunteers (e.g. tenant activists and renters). The two first screens offered information about the study and asked confirmation of eligibility (private renter aged 18 and over) and consent. Only fully completed questionnaires could be submitted. 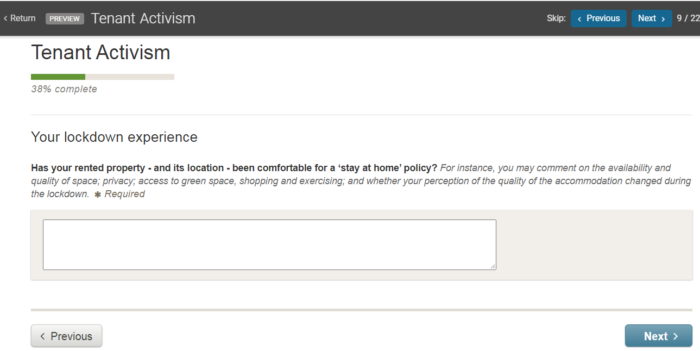 After obtaining ethical approval from the University of Glasgow, the OWI was launched on 11-Sep-2020 by advertising on my and CaCHE Twitter networks (re-tweeted by relevant groups/organisations) and two relevant digital platforms, i.e. tenant support Facebook pages hosted by tenant unions in England and Scotland. As I wanted to keep the number of questions small, I did not ask participants how they heard about my OWI.

A slow take up was expected. However, over the first 50 days, only 23 responses were received, which I confessed, worried me. The take up increased unexpectedly with the help of our communication officer, Lynsay Cooper. Her brilliant promoting text – “we have so far received 23 responses, could you help us reach 30?” – indicated to participants that their input indeed mattered. By 25-Nov-2020, 60 responses were completed, with which I closed fieldwork. Overall, this was a speedy completion if compared to Jowett and Peel’s (2017) study of 82 responses received over seven months.

There was welcome variation in terms of age groups, housing and household types, and financial situations; females were over-represented (n=46; as in Jowett and Peel’s study). One participant was a key worker and four were shielding. Geographically, responses came predominantly from the pressured markets of southern England and the Scottish central belt. A purposeful distribution can be approached through targeted promotion but it cannot be guaranteed. This study aimed not at achieving a ‘representative’ sample. However, it was felt that the opinions expressed and the experiences shared have broader relevance.

The time between start and completion varied between less than 10 min (n=7), 10-44 min (n=40) and over 45 min (n=13). Responses were very rich, totaling over 33,000 words across the 11 open-ended questions (max=2,689; average=555; min=44). This is equivalent to seven one-hour interviews, with the benefit that every word is data (rather than questions asked by the interviewer or chit-chat ‘noise’).  It is this richness of answers to open-ended questions that makes this online questionnaire better described as a written interview. The data were attentively read by each question and by respondent, coded and counted, and cross-tabulated by key categories (Excel software was used). Predominantly thematic but also content analysis was conducted. This allowed observing certain socially-constructed features of data, e.g. descriptions of good housing tended to consist of small statements whereas poor housing generated large narratives.

Suchman and McCandless 1940’s observation that returns to mailed questionnaires or participation in telephone interviews “is influenced by the interest of the recipient in the topic under consideration” applies even more today given research fatigue. As opposed to an oral interview and perhaps closer to respondents’ diaries, OWI gives time-pressured participants a space to express what they wish at a time of their choosing. The issue of technological/digital exclusion remains pertinent. Given that the PRS is usually accessed through online platforms, this research unwillingly excluded those tenants who face extra hurdles in finding a tenancy.

Finally, the OWI successfully collected data of breadth and depth with minimal resource. Used on its own or combined with visual data or oral interviews, the method deserves recognition as a valuable tool in social research.