Effective policy interventions to improve housing affordability depend on making an accurate diagnosis of the problem. In his paper, Professor Meen proposes two valuable measures of housing affordability. However, fluctuations in these measures could be down to a range of factors, making it hard to draw policy conclusions about the most effective response. Adding a third, more fundamental, measure would help to illuminate what’s causing changes in affordability – particularly whether, as so often seems to be assumed, inadequate supply of market sector housing is a factor.

Meen’s first measure relates to rent affordability for low-income households. As a policy priority, this is a crucial thing to monitor. But it begs the question: what should policymakers do if that measure starts to deteriorate? Depending on the underlying driver of change they might, for example, raise housing benefit, build more social housing, increase the minimum wage, or liberalise planning to supply more houses.

These two affordability metrics, then, can be influenced by various things, but have one potential policy lever in common: housing supply. And it’s not unusual to see commentators jump from an observation about declining affordability to a conclusion that we should build more houses as the obvious solution. But the supply lever is only likely to be an effective response if the underlying cost of housing in the market sector is causing the deterioration, rather than any of the many other factors cited above.

This suggests a need to complement these two measures with a third. It should abstract from distributional trends or financial conditions, to answer the question: is the demand for housing services – places to live – outstripping supply and causing affordability to deteriorate? This can be achieved by monitoring the growth of day-to-day housing costs relative to average disposable household income.

The ONS tracks the day-to-day cost of private housing using its Index of Private Housing Rental Prices (IPHRP) and the derived Owner Occupied Housing (Rental Equivalent) (OOH(RE)) to assess the contribution of housing costs to general inflation. These measures are designed to show how the costs of housing are changing on a like-for-like basis. They can readily be combined into an overall ‘housing cost index’ for the market sector using their respective weights in CPIH inflation.

On the income side, the ONS and Department for Work and Pensions both produce survey-based measures of household disposable income for the population as a whole, standardised for household size.

The ratio of market housing costs to disposable income can therefore be tracked. Standard economic theory tells us that if the demand for housing services is outstripping supply, we would expect to see the housing cost index rising faster than average household disposable income. In that case, we could say with confidence that supply was a key part of the policy solution to declining affordability. Conversely, if the ratio is declining we can be reasonably confident that insufficient supply is not the cause of deteriorating affordability on other metrics, since the cost of a given house for the typical household is becoming less burdensome. In that case, boosting supply is unlikely to be an effective solution.

In practice, if we compute such a housing cost index for England and compare it to the evolution of household incomes, it appears that average housing costs have lagged median disposable incomes since at least 2005 (see chart). Such an index could readily be constructed for each region of the UK to understand regional variation in the adequacy of supply. 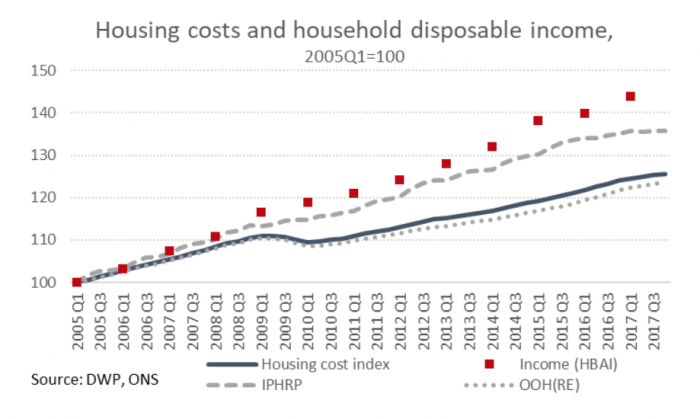 Notes: Median HBAI (BHC) is reported for financial years but observations are noted in the chart as relating to January of the relevant year. HBAI relates to the UK. The housing cost index is calculated here for England only. HCI is constructed using OOH(RE) and private rented property weights supplied by the ONS.

The value of this third affordability measure is that it takes us a step further towards identifying the causes of trends seen in the other two. Crucially, it allows us to gauge whether a lack of market housing is a contributor to deteriorating affordability. That would be a valuable diagnostic tool in the policymaker’s toolkit.

Ian Mulheirn is Director of Consulting at Oxford Economics.