Retrofitting the UK housing stock: what lessons from Scotland’s tenements? 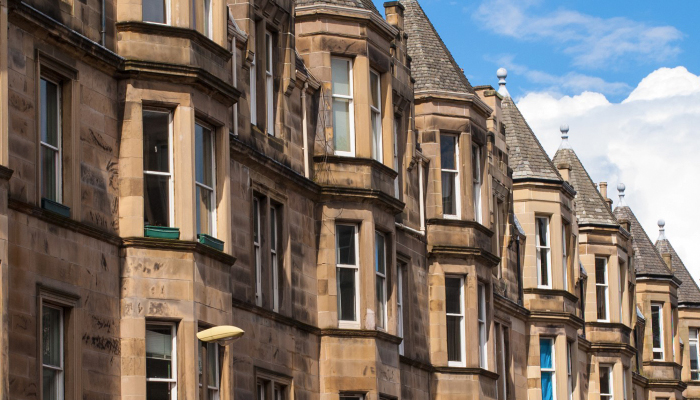 This post by Prof Ken Gibb has been crossposted from the Economics Observatory blog.

To improve the efficiency of UK energy use and reduce carbon emissions, one key area for action is the country’s housing stock. The required retrofit is a massive financial and physical programme. An early initiative of this kind in Glasgow’s tenement buildings offers lessons on how to make it work.

Reducing the use of fossil fuels and making progress towards net-zero carbon emissions over the next 20 years are grand ambitions. But there are considerable hurdles blocking progress: financial; technical; lack of capacity; and behavioural incentives – to name four.

Housing retrofits – whereby existing buildings are changed to improve their energy efficiency and reduce emissions – are useful case studies of these challenges and the progress being made to overcome them.

We know that more than 80% of the housing stock that the UK will have in 2045 already exists. In other words, the required retrofit is a massive financial and physical programme lying ahead. It is made even more challenging by the fact that the country’s housing stock is comparatively old and highly variable in terms of quality and condition.

Can tenement buildings offer an example?

Scottish cities – and Glasgow in particular – have an instantly recognisable built form: the traditional pre-1919 tenement of walk-up flats fronted by red or blond sandstone exteriors. There are 73,000 such flats in Glasgow, more than a fifth of the city’s stock.

They form part of successful high-density neighbourhoods across the city, and come in all housing tenures, often mixed within a given close(that is, a group of flats linked by a common stair and front entrance). Some are in poor condition and in need of repair, and they suffer from the problem of coordinating common repairs among multiple owners.

Tenements also leak carbon and are expensive to heat and insulate – problems exacerbated by net-zero ambitions and rising fuel prices. Plans to retrofit these buildings also need to be consistent with a strong heritage conservation constituency, which seeks to maintain traditional design, materials and the wider aesthetics of tenement living.

This is the context that Glasgow and urban Scotland more generally faces when contemplating how to secure a future for a low-emissions tenement sector.

It was against this background that a unique partnership was formed in 2019 to work through a deep (EnerPHit) retrofit, a near equivalent to PassivHaus for existing properties. Both EnerPHit and PassivHaus are building standards that seek to reduce energy demand and generate net-zero emissions through construction methods, intelligent insulation and renewable heating and power.

The aim has been to launch a demonstration project to prove that this kind of retrofit could be done for pre-1919 tenements. It also seeks to draw replicable lessons for the city’s tenement strategy.

An eight-flat property in Niddrie Road on the inner south side of the city was taken over from a private landlord by a Southside housing association. City council and housing association funding was supplemented by Scottish government funding for the renewable element.

The project was slowed by Covid-19, but it will nonetheless deliver the high degree of ‘fabric-first’ airtight internal and external insulation, mechanical ventilation, waste water recovery as well as other key features (for example, half the properties deploy air source heat pumps).

The fabric-first approach involves a focus on physical property retrofit as opposed to simply changing from fossil fuel energy to something renewable. It recognises that the buildings themselves need to be made energy efficient through better insulation, ventilation and the like to make the most of reduced energy demand.

The properties will be handed over to new social tenants in June 2022.

The project’s evaluation, resourced by the Scottish Funding Council, consists of several discrete but integrated elements:

Early evaluation suggests that this type of project scores well in cost-benefit terms, but it is nevertheless expensive. While there are important lessons from aspects of the demonstration project and it can serve as a model for other retrofits in the UK, challenges remain. The latter two elements of the evaluation will be completed in the winter of 2022/23.

What does the decision-making account indicate for these types of projects?

First, this kind of project can be done, but it is a major realisation and requires commitment from partners and strong leadership.

Second, it is precedent-setting and has to engage closely with what city planners are willing to modify within their existing planning policy for traditional tenements.

Third, winning the Scottish Funding Council evaluation helped to bring in other public funds for the project.

Fourth, there are many second order questions or multiple objectives that had to be resolved in real time as the project evolved during lockdown. Examples include determining what was required to achieve the EnerPHit standard; how best to overcome technical issues with the fabric-first approach given the poor quality of the building; and deciding on the feasibility of different renewable solutions, such as air source heat pumps versus gas boilers or electric heating.

Lastly, it is apparent that the project had advantages that would not always be applicable in other retrofits. In particular, the eight properties were unoccupied and hence there were no temporary alternatives required for residents (known as decanting). Further, there were no housing tenure complications, which would ordinarily be common across Glasgow as individual tenement blocks often house multiple tenures.

Nonetheless, the council have confirmed that there are already evident lessons that can inform how they take their city tenement strategy forward. Examples include the scope for deep retrofit with most, though not all, of the gains associated with this demonstration project and at lower cost. There are also lessons about which components generate impacts, for example, the importance of airtight insulation and good ventilation, and the need for good training and support for residents moving into such properties.

As a result of the project, the construction firm also recognised that there were opportunities for creative phasing of the retrofit works over a period of time, perhaps across larger blocks of properties, which could reduce the disruption for residents.

What does the cost-benefit analysis tell us?

In absolute terms, the cost of the demonstration project was high. Each unit cost a combination of £60,000 for initial acquisition, £44,000 for the basic refurbishment and a further £32,000 for the EnerPHit standard and a £12,000 contingency charge for uncertainties that arose (£148,000 in total).

This was in part because the standard of retrofit was so high, but also because of the poor condition of the property itself. About half of the costs were met by direct grant funding from the city council (primarily) and the Scottish government, with the other half to be repaid out of rents.

The baseline analysis indicates that under a range of scenarios, the EnerPHit retrofit or the lower level refurbishment (equivalent to EPC level B) are always better options than to demolish and rebuild. It is less clear financially whether the net benefit is better for one or other of the retrofit options (it varies across sensitivity analysis options). But only the EnerPHit version delivers net zero and radical reductions of 80-90% in average fuel costs (both in theory and observed in comparable non-tenement projects).

What are the wider implications?

While it will be the spring of 2023 before a comprehensive picture of the retrofit evaluation is available, some lessons can be drawn from the project.

EnerPHit is expensive, but what matters for retrofits is the use of fabric-first airtight insulation plus good ventilation. Not all properties will require the extent of refurbishment required in the demonstration project. The focus should be on fabric and renewables combined rather than the specific choice of renewable alone. This allows for a wider choice of energy renewable systems for the residential sector. This will have relevance for other older property archetypes, as well as tenements.

One important challenge is how to give owners (including landlords) the incentives to make these changes to their properties. Further, how do we solve the classic problems of the tenement built form – that is, organising and paying for collective or common repairs across different flat owners? How do we package together small area-based programmes and sequence them to reduce disruption and resident decanting during the works phases?

The Scottish Law Commission is currently examining legal reform to promote ownership associations, sinking funds and mandatory property inspections. It also looks as if other housing associations with tenement properties in Glasgow are exploring close to EnerPHit alternatives that may be a little more affordable as investments.

Mass retrofit requires significant economic restructuring and the greening of supply chains, and a host of services relating to domestic energy use. But the lesson from this demonstration project, as well as elsewhere, is that retrofitting must be fabric-first and thereby reduce the energy demand that households require. This implies considerable new work for construction sector trades, even if it is not at the demanding level that EnerPHit requires of a pre-1919 tenement.

View the original post on the Economics Observatory blog.

Professor Ken Gibb is the Director of the UK Collaborative Centre for Housing Evidence.

Photo by Drimafilm from iStock