In the three decades post-WWII, land was central to the national political debate. For the Labour Party, land speculators were viewed as the chief culprit for housing supply shortages, and the ability of landowners to benefit from rising land values was one of the country’s chief injustices. This was reflected in their various policies which sought to capture land value for the state, either through taxing betterment value, or through nationalising land altogether. The Conservative Party, on the other hand, was much less keen on state intervention in the land market. This led to a tit-for-tat war between the two parties, as policies were moved forward, back and defeated like pawns on a chessboard.

What is remarkable though is how little political attention and debate these policy changes have received. This depoliticization process is demonstrated in the figure below, which tracks the number of references to betterment value capture terminology in the Houses of Parliament. If we exclude ‘affordable housing’ (the spike in blue from the 1990s onwards) and only look at the remaining terms, which relate specifically to betterment value capture then the number of references dropped dramatically in the 1980s and remained low until 2005. By then, the average voter could hardly tell their S106 from their S21. 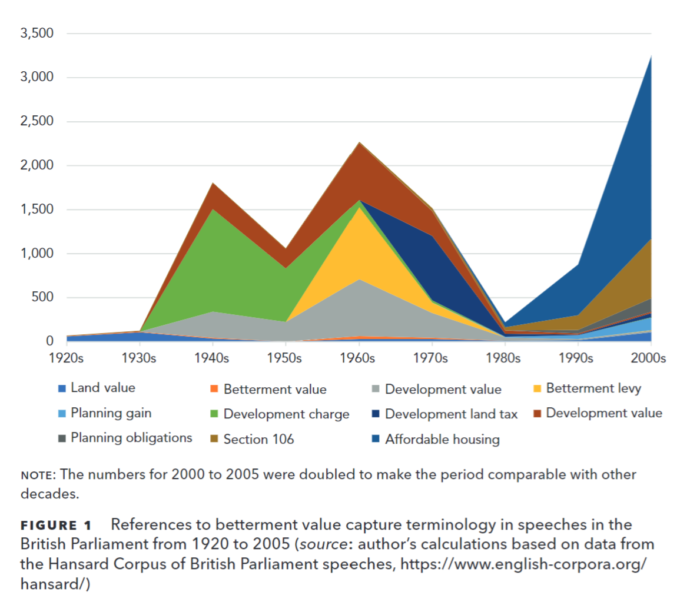 The three faces of depoliticisation

How did the issue of land, and more specifically betterment value capture, become politically marginalised? Focussing on the period 1980-2008 (i.e. pre-Global Financial Crisis), I argue that this depoliticization process, whereby an issue moves away from the realm of contestation and contingency and towards that of fate and necessity, took place across three faces.

First, economic interests. In the 1960’s, most voters were renters, and therefore had an interest in (Labour) policies which would capture greater land value for the state. Over the next two decades, however, as home-ownership grew to become the dominant tenure, and the economy more generally became ‘rentierized’ (Christophers, 2020), the coalition of actors with an interest in rising land values became increasingly powerful. This convergence of economic interests incentivised the Labour Party to drop any radical land value capture policies that would scare off homeowners.

The second face of this depoliticization process involved a dramatic convergence in the ideas that policy elites used to understand and respond to policy problems. In the post-war decades, academic economists, such as Harold Wilson and Antony Crosland, were the primary intellectual driving force behind Labour Party policy (Mudge, 2018). Typically, they blamed rising house prices on land speculation and the ‘free market’ in land, and were therefore keen advocates for interventionist betterment value capture policy.

Back then, economics was a pluralistic discipline, incorporating Marxists, Institutionalists etc. This changed over the 1970’s and 80’s as mainstream economists in Britain followed their US colleagues by rallying round a tightly policed set of values and beliefs (e.g. mathematisation, economic efficiency, deductive reasoning) . As the discipline became “Americanised”, so its interpretation of land also became standardised. Land (and housing) markets were no longer considered “special” and therefore doomed to market failure. Rather, land was subject to the same laws of supply and demand as other factors of production. Consequently, if markets were allowed to work to their own devices, without unnecessary planning constraints, then there was no need for blunt betterment value capture policies. This convergence in ideas fed through into New Labour which followed the Conservatives in attributing housing unaffordability to an overly restrictive planning system rather than insufficient state intervention in the land market.

The third face of depoliticization relates to the rules, laws and institutions governing land value capture. Historically, local authorities had considerable political agency in interpreting (or resisting) central government betterment value capture policy. In terms of the S106 regime, until the mid-2000’s local authorities were free to set very ambitious affordable housing targets, even if it meant fewer financially viable sites overall. Over the 2000’s, however, central government increasingly squeezed the space of local authorities, through insisting that affordable housing targets set out local plans must not make development “unviable”.

Crucially, though, central government itself did not specify how ‘viability’ should be appraised (McAllister et al., 2016). If it had done, then it would have had to deal with an array of value-based questions, such as what constitutes an appropriate price for the landowner, or what represents a ‘market’ return for developers. Instead, central government stepped back and left it to a range of unelected institutions to decide whether a local authority’s affordable housing supply compromised viability or not (McAllister et al., 2016), such as viability consultants and their models. Through cloaking their judgements in the technical terminology of development economics, these actors largely avoided political scrutiny.

Taken together, these three faces explain why land fell off the political agenda. Since the global financial crisis, however, land value capture has become re-politicized. Inverting the three faces of depoliticization there are several likely reasons for this emergent re-politicization. In terms of economic interests, the decline in home-ownership has given rise to a constituency of renters who are potentially more critical of house price inflation. In terms of governance, the sharp decline and then plateauing of house prices (at least until COVID-19) has meant that there is now less betterment value capture to go round, leading local authorities and campaign groups to apply greater scrutiny to the ‘dark arts’ of viability appraisal and the constraining role of central government (McAllister et al., 2016; Grayston, 2017). Finally, In terms of economic ideas, although neoclassical economics still remains dominant, the idea that land should be understood as a distinct factor of production has begun to receive serious consideration once more (e.g. Ryan-Collins et al., 2017)

Dr Chris Foye is a Lecturer in Housing Economics in the Department of Real Estate and Planning at the University of Reading.